"To Kill A Mockingbird"--Houses As Characters (Book To Art)

It's Spring again, which means it's time for another "Book to Art" project!  As you may remember, "Book to Art" is a global club that encourages individual readers and library clubs to take literature that they have found to be meaningful or inspiring and to reinterpret those books or exerpts as creative art pieces.  Feel free to check out my previous "Book to Art" project on Elizabeth Gaskell's "Cranford" here.

In honor of Harper Lee's recent passing, I decided to do a "Book to Art" project on "To Kill A Mockingbird," a book that has been a pivotal school text for many people around my age (**Major Spoilers Below!**).  If you have read the book, you know that nearly every character and situation that we are introduced to by siblings Scout and Jem Finch has to be re-evaluated as new information comes to light over the course of the novel.  The children (and we as readers) are frequently reminded, through the experiences of various citizens of Maycomb, Alabama, and through talks with their father, the lawyer Atticus Finch, of how important it is to reserve judgment instead of jumping to passionate conclusions, to walk in someone else's shoes and examine the other sides of every situation, rather than just choosing the easy or self-serving explanation, and to pick fights we know we can't win if we deem the cause or injustice important enough (and to control our tempers and refrain from boasting while acting like intelligent and courteous ladies and gentlemen whenever possible).

I went about this project backwards.  I drew the homes of 3 of the characters in the novel, before I went back and re-read the passages that described their neighborhoods and actual houses. As a result of this reversed process, I did make a few small mistakes (the Radley place is surrounded by oak trees that keep out the sun, and Mrs. Dubose actually sits in a wheelchair, not a rocking chair), but I am overall very pleased with how closely the images in my memory paralleled the houses described in the book.

In my mind, each "abandoned" homestead serves as a visual symbol of a family and its status and level of (non-)integration into the tightly-knit community of Maycomb County.  The Radley family keeps themselves apart, and basically pretends that their son Arthur Radley, whom they have hidden away in their house, has never existed. Mrs. Dubose is a house-bound elderly lady, due to her illness and drug addiction, but retains a tenuous connection with the community by sitting on her porch and observing and calling out to her neighbors until her death.  The black members of the community work in Maycomb proper, but live out beyond the dump and nurture their own smaller community.  Tom and Helen Robinson are a part of and supporeted by this sub-community, but are each further ostracized and isolated from a large portion of the white community when Tom is arrested and falsely accused of having raped neighbor Mayella Ewell.

Below, I present each sketched homestead, paired with passages from the novel that describe the house and its setting.

"The Radley Place" (Arthur "Boo" Radley & family)
"The Radley Place jutted into a sharp curve beyond our house. Walking south, one faced its porch; the sidewalk turned and ran beside the lot. The house was low, was once white with a deep front porch and green shutters, but had long ago darkened to the color of the slate-grey yard around it. Rain-rotted shingles drooped over the eaves of the veranda; oak trees kept the sun away. The remains of a picket drunkenly guarded the front yard--a "swept" yard that was never swept--where johnson grass and rabbit-tobacco grew in abundance...The Radleys, welcome anywhere in town, kept to themselves, a predilection unforgivable in Maycomb...Nobody knew what form of intimidation Mr. Radley employed to keep Boo out of sight...My memory came alive to see Mrs. Radley occasionally open the front door, walk to the edge of the porch, and pour water on her cannas. But every day Jem and I would see Mr. Radley walking to and from town."

"The neighborhood thought when Mr. Radley went under Boo would come out, but it had another think coming: Boo's elder brother returned from Pensacola and took Mr. Radley's place. The only difference between him and his father was their ages...Mr. Nathan would speak to us, however, when we said good morning, and sometimes we saw him coming from town with a magazine in his hand." --Chapter 1 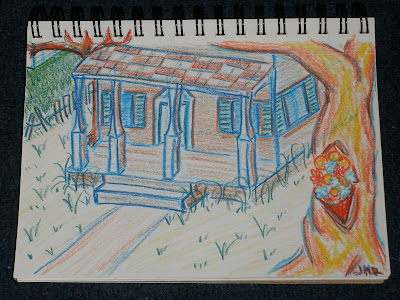 Mrs. Henry Lafayette Dubose
"Cecil Jacobs, who lived at the far end of our street next door to the post office, walked a total of one mile per school day to avoid the Radley Place and old Mrs. Heny Lafayette Dubose. Mrs. Dubose lived two doors up the street from us; neighborhood opinion was unanimous that Mrs. Dubose was the meanest old woman who ever lived. Jem wouldn't go by her place without Atticus beside him." --Chapter 4

"Mrs. Dubose lived alone except for a Negro girl in constant attendance, two doors up the street from us in a house with steep front steps and a dog-trot hall. She was very old; she spent most of each day in bed and the rest of it in a wheelchair. It was rumored that she kept a CSA pistol concealed among her numerous shawls and wraps."

"If she was on the porch when we passed, we would be raked by her wrathful gaze, subjected to ruthless interrogation regarding our behavior, and given a melancholy prediction on what we would amount to when we grew up, which was always nothing. We had long given up the idea of walking past her house on the opposite side of the street; that only made her raise her voice and let the whole neighborhood in on it." --Chapter 11 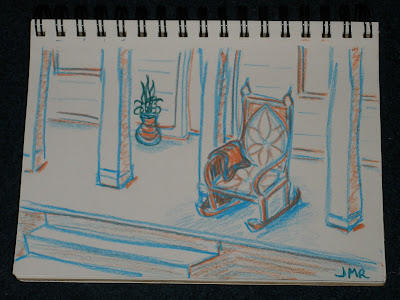 "The Negro Cabins" (Tom & Helen Robinson)
"A dirt road ran from the highway past the dump, down to a small Negro settlement some five hundred yards beyond the Ewells'. It was necessary either to back out to the highway or go the full length of the road and turn around; most people turned around in the Negroes' front yards. In the frosty December dusk, their cabins looked neat and snug with pale blue smoke rising from the chimneys and doorways glowing amber from the fires inside. There were delicious smells about: chicken, bacon frying crisp as twilight air. Jem and I detected squirrel cooking, but it took a real country man like Atticus to identify possum and rabbit, aromas that vanished when we rode back past the Ewell residence." --Chapter 17
"They turned off the highway, rode slowly by the dump and past the Ewell residence, down the narrow lane to the Negro cabins." --Chapter 25 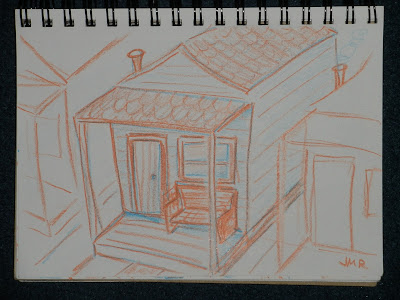 It was only after I had sketched the above 3 "abandoned" houses that I realized that I had been drawn to 3 characters that I felt were incompletely integrated into Maycomb's small town life.  I felt that it was important to add a fourth sketch for the Ewell family, the "lowest" status white family in Maycomb, and the source of a lot of the drama and unrest that takes place in the book.

"Maycomb’s Ewells lived behind the town garbage dump in what was once a Negro cabin. The cabin’s plank walls were supplemented with sheets of corrugated iron, its roof shingled with tin cans hammered flat, so only its general shape suggested its original design: square, with four tiny rooms opening onto a shotgun hall, the cabin rested uneasily upon four irregular lumps of limestone. Its windows were merely open spaces in the walls, which in the summertime were covered with greasy strips of cheesecloth to keep out the varmints that feasted on Maycomb’s refuse."
"The varmints had a lean time of it, for the Ewells gave the dump a thorough gleaning every day, and the fruits of their industry (those that were not eaten) made the plot of ground around the cabin look like the playhouse of an insane child: what passed for a fence was bits of tree-limbs, broomsticks and tool shafts, all tipped with rusty hammer-heads, snaggle-toothed rake heads, shovels, axes and grubbing hoes, held on with pieces of barbed wire. Enclosed by this barricade was a dirty yard containing the remains of a Model-T Ford (on blocks), a discarded dentist's chair, an ancient icebox, plus lesser items: old shoes, worn-out table radios, picture frames, and fruit jars, under which scrawny orange chickens pecked hopefully. "
"One corner of the yard, though, bewildered Maycomb. Against the fence, in a line, were six chipped-enamel slop jars holding brilliant red geraniums, cared for as tenderly as if they belonged to Miss Maudie Atkinson, had Miss Maudie deigned to permit a geranium on her premises. People said they were Mayella Ewell's."
"Nobody had occasion to pass by except at Christmas, when the mayor of Maycomb asked us to please help the garbage collector by dumping our own trees and trash." --Chapter 17 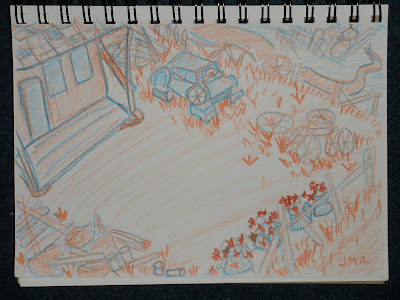 This project became a lot more symbolic and layered as I worked on it. In the beginning, I was only drawing interesting houses that belonged to colorful supporting characters! I highly recommend trying an art project like this with a book you enjoy.
Posted by CuddliesbyJackie at 5:00 PM No comments:

CuddliesbyJackie
Hello! I'm here to share my obsession with Plushie Companions and Fibercrafts with all of you! Check in for crafting ideas, as well as links to fun fiberarts techniques. Good luck with your own crafty projects!